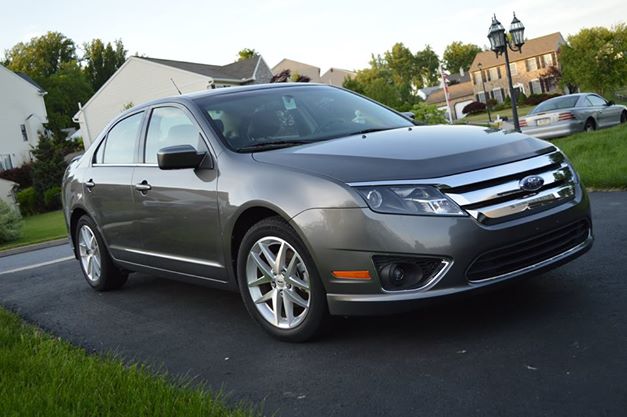 For those of you shopping for a used car, the 2010 – 2012 Ford Fusion might find it’s way on to your short list of cars to consider. It made my list a few months ago when trading in my gas guzzling Ford Excursion. The Ford Fusion sits firmly in the family sedan class with the likes of the Honda Accord, Mazda 6 and Chevy Malibu. Below are a few notes which may help you decide if the Ford Fusion is right for you…

The Fusion comes in front wheel drive and AWD trim. The AWD is scarce on the used market, offers slighly worse gas mileage and has more to go wrong with it, I chose the FWD for it’s simplicity.

The base engine is a 2.5L 4 cylinder mated with a 6 speed automatic or 6 speed manual transmission making 175 horsepower and 172 foot pounds of torque. The manual transmission is more rare than the AWD option, but on the one I test drove shifted well and seemed to make the 4cyl. engine a little more peppy. I did drive the automatic too, and it was simply not impressive in it’s power or shifting… more on that later. Reporting mileage seems to be in the 25 – 30MPG range depending on your location (hills vs. flat land) and driving style.

The next step up in the Fusion is the 3.0L V-6 engine which Ford has been running in their lineup for years and offers 240 horsepower and 233 foot pounds of torque. It’s a reliable work horse for Ford and has seen many 100′s of thousands of miles in the Taurus model. The fuel economy of this engine gets better and better with the addition of technology which allows cylinder deactivation on deceleration. In other words, you let off the gas and coast, the engine does not fire certain cylinders (and injectors) to save fuel. This results in a slight engine braking effect which is noticable but not undesired. Gas mileage in real life is 20 – 25mpg. I have this engine in my Fusion and can get 27 on long highway trips and average 24 – 25mpg in mixed driving. The only transmission available on the 3.0 V-6 Fusion is the 6 speed automatic.

The last engine is the 3.5L V-6 which is available on the Sport models and bumps the numbers up to 263 horsepower and 249 foot pounds of torque. I did not test drive this engine/transmission combination. There were several available in my area but from research then extra power was not really worth it, and the interior options were limited under the sport trim package. This engine is also only available with a 6 speed automatic transmission, but it’s a different transmission than the 3.0L gets. Again more on that later…

This is just a basic overview. You can search online for more details, or check the dealer’s websites to get specifics for the Fusion.

The car looks good, now I know this is a personal thing and very subjective. Some like the grill, some don’t, I am in the later camp. If you could give me the front grill from the 2013+ Fusion and the rear from the 2010-2012 I would be a very happy camper.

The interior is comfortable, and at 6’4″ I consider this a major factor. I am however almost out of headroom depending on how I have the seat back adjusted. Fully up, and my head hits. This is most likely due to the sunroof, as the cars I test drove without the sun roof seemed to have plenty of headroom. The fit and finish is good, not excellent but good and the leather seating surfaces are comfortable and should hold up to spills. I owned a 2004 Acura TL which I have been comparing with my Fusion and the interior on the TL was excellent, no surprise there, but the Fusion comes closer than any other American car I have driven.

The 3.0L engine is silky smooth, quiet and powerful. There is enough power on tap with an acceptable MPG rating at the end of the drive, sounds about right! Then engine is so quiet that when you start it, you will wonder if it’s actually running.

The ride is the perfect mix of confidence and compliance which leads to spirited driving and comfort on long trips. It’s not a corner burning sports sedan, but it’s not a boat either.

This may be a minor issue, and it may be just me, but the steering wheel controls are ass-backwards! I prefer the Honda layout where the most common controls are on the left side of the wheel. This means the audio volume, channel and mode switches can be accessed with the hand steering. I drive with my left arm on the door and wheel, right hand is on the shifter or resting on my leg. Again maybe it’s just me and the way I drive, but I am sure there are some people which will agree with me.

The heating and A/C controls are too low in the center stack to make it easy to change settings. It’s just too low! I don’t even have the navigation screen to take up the room higher up on the dash.

The electronic throttle is touchy. In first gear the slightest touch of the gas pedal will result in the car lurching forward. You get used to it, but it’s not great when a new driver gets in the car. No way to adjust it, and while there is a recall out on the throttle body, my car has been fixed and it has not helped the sensitivity issues.

The transmission! I am going to blame my wife for this one… she did not like the idea of the manual transmission 4cyl. SE I test drove, so I opted for the V-6 SEL. Yeah I got the better interior, Sony speakers and cool dual exhaust but the transmission almost makes it not worth it. The transmission shifts at odd times, hunts for gear, and at times slams in to gear with a shudder that would make an owner without a warranty crap his pants. I bought a certified Fusion so I am good, and fully expect the transmission to be replaced before that warranty expires. Some of the issues are from the simple fact that there are 6, count them 6 speeds in this slush box. I know EPA regulations have put pressure on manufacturers to get the most MPG out of a car, and adding more shift points keeps the engine in most economical RPM range, but really Ford??? If I drive the can in “Manual Mode” it’s fine, but put it in Drive and it’s an annoying experience.

Would I buy it again? Maybe… I might take the 2.5cyl 6-speed manual SE and teach my wife to drive stick-shift. I did mention I was comparing the car to my old 2004 Acura TL quite often, and if I did not have the desire to own an American car, I would buy another one. The TL was just as fast, if not faster, close to the same interior room, and the fit and finish was top notch. Also maintenance was easy, and the reliability was second to none. Not much experience with maintenance on the Fusion yet, time will tell…

The transmission seems to be better, or I am getting used to it, not sure which. In the very cold mornings of this PA winter, it sometimes contemplates the meaning of life before shifting, but all in all, once warmed up it seems better. Might be the colder weather making a difference.

Another complaint I have is with the climate control system. On the lower end of the digital temperature range, you have 60 which is full outside air. The next step on the system is 65 degrees. So if it’s winter and the outside air is 30 degrees, you either have ice cold air hitting you or hot air at 65 degrees. This makes regulating the temperature a dance between fan speed and the temperature dial. It would be nice of Ford to give finer control of the temp.