WAIT, BEFORE YOU SCROLL DOWN! While I know a lot about cars, I don't know a lot about YOUR CAR! A repair manual is essential for troubleshooting fuel issues.
Click Here To Read More(Link opens in a new window)

When you turn the key, you should be able to hear the fuel pump start up. It may be hard to hear, so have someone outside the vehicle listen, make sure they are close to the gas tank. Also check the fuel pump fuse and inertia switch... what is an inertia switch you ask??? Some vehicles have a sensor in the trunk with shuts off the fuel tank in the event of an accident. This could be a minor fender bender in the parking lot while you are away from the vehicle and unaware. Most inertia switches have a reset button so you can reset them and continue on your way.

Car not running well? Sputtering or down on power? It's possible you got some bad gas which has water in it. A bottle of "Dry Gas" can help absorb the water in your fuel tank. Not as common these days since more gas stations monitor and have much better tank systems, but it still can happen.

Learn how to spot a bad fuel pump and more... 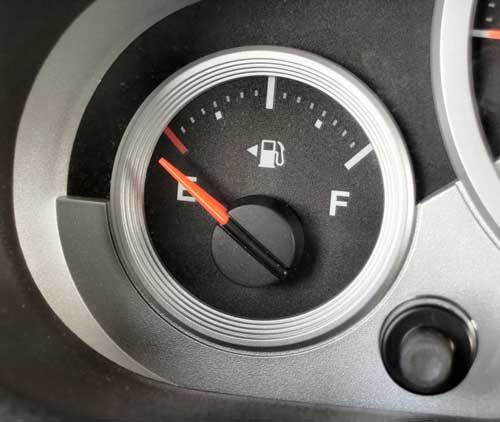 All internal combustion engines need three things to run... Air, Fuel and Spark. The fuel system is critical in storing and delivering the gasoline or diesel fuel your engine needs to run. Think of it as your vascular system, with a heart (fuel pump), veins (fuel lines) and kidneys (filter). A failure in any of these fuel system components has the same devastating effects as in your body. Let's get a little more in-depth with each part...

Basically a holding tank for your fuel. When you fill up at a gas station the gas travels down the filler tube and into the tank. In the tank there is a sending unit which tells the gas gauge how much gas is in the tank. In recent years the gas tank has become a little more complicated, as it now often houses the fuel pump and has more emissions controls to prevent vapors leaking into the air.

Clean fuel is critical to engine life and performance. Fuel injectors and carburetors have tiny openings which clog easily so filtering the fuel is a necessity. Filters can be before or after the fuel pump, sometimes both. They are most often made from a paper element, but can be stainless steel or synthetic material and are designed to be disposible in most cases. Some performance fuel filters will have a washable mesh, which eliminated the need for replacement.

Most domestic cars after 1986 and earlier foreign cars came from the factory with fuel injection. Instead of a carburetor to mix the fuel and air, a computer controls when the fuel injectors open to let fuel into the engine. This has resulted in lower emissions and better fuel economy. The fuel injector is basically a tiny electric valve which opens and closes with an electric signal. In the picture below you can see the injectors towards the outer part of the intake. By injecting the fuel close to the cylinder head the fuel stays atomized ( in tiny particles ) so it will burn better when ignited by the spark plug.

A carburetor takes the fuel and mixes it with air without computer intervention. While simple in operation, they tend to need frequent tuning and rebuilding. This is why newer cars have done away with carburetors in favor of fuel injection.

I would say the most common problem is a clogged fuel filter. Make sure you follow your manufacturers recommendations as to when you should change the fuel filter. This information should be in your owners manual. Symptoms include sputtering at high speeds or engine not starting at all. Always check the ignition system first, if that's ok then the next suspect is the fuel filter.
Next most common problem is the fuel pump failing. Most modern electric fuel pumps can be heard when you turn the key on. If you don't hear the pump running and your car will not start, it could be your fuel pump. The first thing a mechanic will check is the relay which sends power to the pump. If this is operating correctly then the pump will have to be replaced.
Last but not least is dirty injectors. While the fuel filter does a good job of filtering the fuel, it's not perfect. Over time deposits and tiny particles lodge themselves in the injectors. This can clog an injector and prevent it from delivering the fuel the engine needs. It can also cause an injector to stick open and send too much fuel into the engine. A regular addition of fuel system cleaner like STP Injector Cleaner, or Techtron fuel system cleaner can help keep your injectors clean. Most gas stations, department stores and all automotive parts stores will have a good cleaner available. Add it to your empty tank right before you fill up and it will clean as you drive. I recommend doing this every 3 months to keep your injectors performing like new. Mechanics also offer a cleaning service where they actually disconnect the fuel line and flush cleaner through the engine. This is only necessary when you let your injectors get to a point where they can not be cleaned by a store-bought product. Regular use of a good in-tank cleaner will keep you from having to pay for this service.

Where do you buy your gas?

Believe it, or not, it can make a difference. Always buy from a well know national brand service station. Gas stations which are not affiliated with one brand of gas tend to get whatever is left at the end of the day from the delivery truck. One day them might get Texaco, and Exxon another. Also water mixed with gas will cause problems with your engine. The engine will not run right, plus the water will promote rust in the fuel system. I have experienced this when I purchased gas at some no-name gas stations. Your car will feel sluggish and sometimes refuse to run if there is enough water in the gas.

Putting super in the tank will not get you any more performance or gas mileage unless specifically recommended by your cars manufacturer. If your owners manual says put in 87 octane...... DO IT. You are throwing money out the window if you are filling up on Super or Premium and you only need Regular.