WAIT, BEFORE YOU SCROLL DOWN! While I know a lot about cars, I don't know a lot about YOUR CAR! A repair manual is essential and I have a way for you to get one FREE.
Click Here To Read More(Link opens in a new window)

How to remove rust? 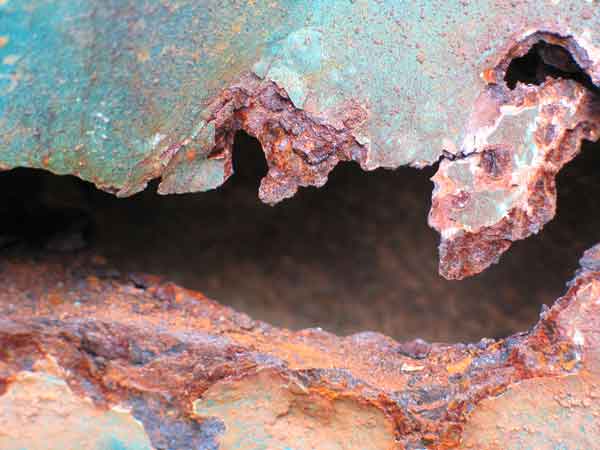 First some background... Rust is the result of an electro-chemical reaction between iron and oxygen and the end result is iron oxide. As with many chemical reactions we need a third element which in this case is water or H20. Do we need to flash back to high school chemistry class? Not really, just know that the more water is around, the faster rust will form. Water can be in the form of rain or just relative humidity, so the dryer the climate you live in, the less rust you will experience. This is why the best old cars come from Arizona and other western states with dry climates.

You have several ways to deal with rust...

Get out the sandpaper, grinders and wire brushes! Physical removal of rust involves using something harder that the rust you want to remove and using it to wipe off that iron oxide. Wire brushing will take the longest time, sandpaper is better and if you use a power tool or air tool it's even faster. Grinders are great if you have a lot of rust on heavy metal where there is no danger of ruining the base steel. Abrasive blasting (also known as Sand Blasting, but never use sand due to Silicosis) is also an option and while dirty and sometimes expensive, it does a great job of getting in to all the nooks and crannys.

All physical means of rust removal will produce heat as a by-product. Depending on how thin the metal is below the rust, this may warp the panel you are working on. Care should be taken to minimize heat buildup.

Don't want to put in the elbow grease required with hand sanding, or wire brushing the rust? You can use chemicals to remove it, in the form of acid. There are several products on the market that have some form of acid (Phosphoric Acid typically) and can be applied to rust. Care should be taken when using these chemical rust removers as they are mild acids and can cause damage to human tissue. The advantage of using chemicals is that there is a lot less manual labor, and the liquid can squeeze in to cracks and crevices which a wire brush or sandpaper can not.

Take away one element of the electo-chemical reaction and rust can not form. If you can keep oxygen from getting to the base metal you can halt the rust process. If the rust you are treating is not affecting the structural integrity of the part and you don't care what the final finish looks like, you can simply seal over the rust and be on your way. Some rust sealers can be top coated and even filled with body filler and sanded for a smooth finish but if you are going to this extent, you should consider removing the rust.

Similar to encapsulating, rust converters seal off the base metal from oxygen using a coating of the rust itself. The rust is chemically converted into a hard durable layer which does not allow the oxygen in the atmosphere to further react with the metal underneath. The advantages of using this method is that the rust converter is usually water soluble and safer than using acids.

Which process is best for which application?

When talking about cars, rust can pop-up in many places.

Body Panels: I recommend physically removing as much rust as possible, then following up with a chemical removal product if any rust remains in pits or crevices. Immediately follow up with an epoxy primer and finish panel with your paint of choice.

Frame components: If you have light rust and encapsulator paint is the quickest way to stop the rust and provide a finish which is presentable. If you are restoring a car and want the best possible finish, physical removal followed by chemical removal and top coating with an encapsulator will give you the best finish and protection.

Wheels: If you have steel wheels, you may also have rust. I would recommend sandblasting as the easiest way to remove the rust and prepare the base metal for refinishing. If you are going to use a hubcap over the steel wheel and do not care about the looks, and encapsulator will work just fine.

Exhaust: There are high-temp paints out there that will keep rust from forming. You can physically remove the rust from exhaust components and top-coat with paint. This will extend the life of your exhaust but given the environment your exhaust system lives in (high heat and moisture) it's a losing battle. Some modern cars use stainless steel for it's corrosion resistance, most costly but usually lasts the lifetime of the vehicle.

What about Rust Prevention?

Rust prevention or rust proofing involves removing one or more of the elements from the electro-chemical reaction before the rust can form. We have several options...

Remove the electo from electro-chemical!

The reaction which forms rust involves an exchange of electrons from the steel to the oxygen. There are several electronic options on the market to protect your car from corrosion by making sure that when those electrons are exchanged they are immediately replaced so no rust occurs. This requires a power source which is your car's battery and will create a minimal drain on your battery.

Salt is not just bad for your blood pressure!

Salt speeds up the process of rust, so in states where you get a lot of snow and road crews use salt, make sure you rinse your car's under-carriage several times per season.